Tecno is one of the biggest smartphone brands to grace the African continent. This company has several product lines including the Camon series. It recently just announced the release of its latest addition to this series, the Tecno Camon 17 Pro. In this post, we will discuss the price and specs of this smartphone before reviewing some of its key features. 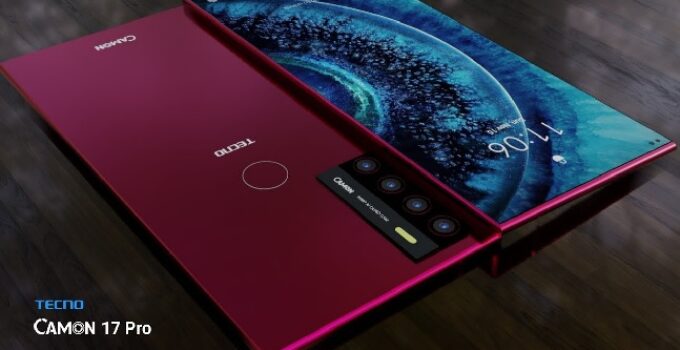 The Tecno Camon 17 Pro is meant to be an upgrade on the Camon 17 and 17P. In this section, we will look at some of its key features to determine if it is truly an upgrade or not. Let’s get started.

The chassis design of any smartphone is one of its major selling points. This is because that’s the first thing that anyone sees first before the software and other components. Tecno understands how important the chassis design of a phone is and always invests in creating amazing designs.

The Tecno Camon 17 Pro has a similar chassis design to the Camon 17 and Camon 17P. Notwithstanding, there are a few differences such as the color, fingerprint sensor location, and camera module.

Let’s begin with the colors used in designing the Camon 17 Pro. The Tecno Camon 17 Pro comes in just two different colors, unlike its predecessors that have three color variations. These colors include Malibu Blue and California Silver.

Another marked difference is the position of the fingerprint sensor. On the Camon 17, the sensor sits on the rear cover, close to the camera module. This sensor has a different location on the Camon 17 Pro, it sits at the side of the device. Tecno believes this makes it more convenient for the owner to use the sensor.

Lest we forget, the camera module in the Camon 17 Pro is similar to the one on Camon 17P. Both devices feature four rear cameras along with a Quad-LED flash, HDR, and panorama. Lastly, there are the Camon and Tecno logos displayed boldly on the rear casing.

Of all the smartphones in the Camon family so far, the Tecno Camon 17 Pro has the most premium cameras. Tecno did a great job at putting in better cameras than what you have in the Camon 17. The primary camera on this device is 64 megapixels which are 16 more megapixels than the camera in the Camon 17.

It is impossible to give a proper review of a smartphone without mentioning the software and hardware. The first noticeable upgrade on the predecessors of this smartphone can be found in the chipset. Previous versions of this smartphone feature an Helio G85 chipset while the Camon 17 Pro features a G95 chipset.

Just like its predecessors, this device runs on Android 11 with the HIOS7.6 interface. The Tecno Camon 17 Pro promises more speed and storage space than any of the previous Camon smartphones.

The battery of a smartphone is very important to its use and operation. No one wants a device that has a poor battery. Tecno has a clear understanding of this and equips this device with a 5000mAh battery. This is similar to what you have in both the Camon 17 and Camon 17P. The only difference is that the battery in this device features 25W fast charging unlike the 18W fast charging in its predecessors.