Following its surprise reappearance in 2017, Nokia has made huge strides to prove to all that they are back in the game. Although the company, HMD Global, released three smartphones in 2017, what many people waited for was its flagship device which has now come in the Nokia 8.

Are you interested in knowing the Nokia 8 price in South Africa? Will this smartphone catch the fancy of phone enthusiast and bring back the lost glory of the Nokia brand? Sit back and read on to know how much the smartphone costs as well as the specs it comes with. 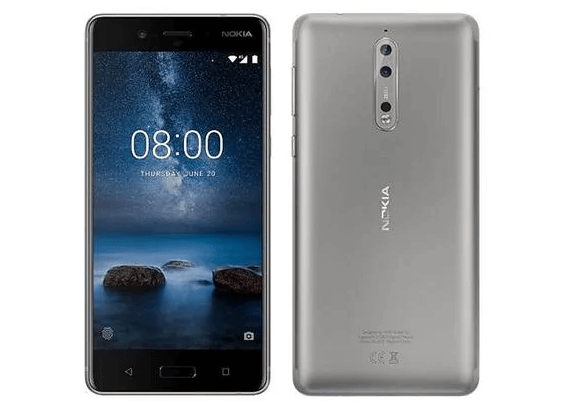 You can purchase a unit of the Nokia 8 from popular phone stores across the country for anything between R$7,380 and R$7,740. You can also make your order from any the online stores and have it delivered to your home or office. However, keep in mind that prices are subject to change based on factors like exchange rate, location, period of purchase among others.

Nokia 8 flaunts a sleek, gorgeous design that’s befitting for a flagship smartphone. It’s regarded as one of the most beautiful phones of 2017 with the Nokia logo emblazoned on the rear. It features an aluminium and glass body design with metal edges. Its thin body which measures at 9.9mm at its thickest point makes it easy to hold in the hand. Covered with plastic are the antenna lines along the top and bottom of the smartphone but they don’t reduce the attractive look of the Nokia 8. Instead, their positioning makes it easier for you to get a better signal whenever you hold the phone.

Furthermore, the volume and power buttons are placed on the right-hand side of the phone while the SIM card slot occupies the left side. The top of the smartphone features a 3.5mm audio socket and on the bottom is the USB Type C charging slot as well as the speaker. The rear of the phones houses the dual main camera. Unlike other flagships like Samsung Galaxy S8 or iPhone 8, the Nokia is not water-proof. HMD Global, however, says the phone is splash-resistant (IP54 rating), meaning you can use it in the rain without any cause to worry.

The Nokia 8 flagship smartphone comes in four colour variants which include: tempered blue, polished blue, steel and polished copper. You might want to invest in a case for the polished models as they seem to pick a few scratches after some weeks of use.

The Nokia 5.3-inch unit boasts of QHD display with 1440 x 2560 pixels resolution and a pixel density of almost 555 pixels per inch as well as 16:9 aspect ratio. It features an LCD panel with over 700 nits of brightness, making it possible for you to view your phone’s display even in direct sunlight. Since the screen is not so big (5.3-inch), those with smaller hands should find it easy to navigate the device during use.

Just beneath the screen is a fingerprint scanner to allow for phone unlock alongside two capacitive keys. However, the fingerprint sensor is small and will require you to properly place your finger or thumb right on the sensor, after which the phone unlocks quickly. The display features a Corning Gorilla Glass covering to protect the smartphone from scratches. In all, the colour reproduction and quick visibility are impressive and we rate the Nokia 8 high in the display department.

Like all its predecessors, the Nokia 8 won’t blow you away by its battery capacity. It maintains the tradition of modesty with the 3,090mAh cell but you probably won’t notice it because of the chipset that’s less power-hungry. If you ever thought a battery capacity like the Nokia 8’s can’t perform to an acceptable standard, you’re wrong. Under heavy usage, the smartphone can get you through the day on a single charge. The Qualcomm Snapdragon chipset handles the power demands flawlessly, especially when it comes to powering the QHD screen.

Additionally, the Nokia 8 comes with a cooling system to keep the temperature of the smartphone under control so the battery doesn’t get used up very quickly. You might find this to be helpful if you’re a die-hard gamer as the cooling will not only improve your gaming experience but also make the extend the battery life. To crown it all, the phone also features fast charging to help you top your phone up in a short time.

Nokia finally joins the list of smartphones with the dual rear camera setup with the Nokia 8 which is powered by Carl Zeiss optics. The dual camera setup comprises two 13MP shooters – one of which functions as RGB lens while the other as a monochrome camera to offer high quality even in low light conditions. Interestingly, you can still choose to take a photo with just one of the lenses if you wish but the best option is the monochrome because it captures high quality black and white shots.

Adding to the above, Nokia also comes with an impressive 13MP shooter for selfies. And you can combine images taken by both the main and selfie cameras. However, the images on the Nokia 8 are not as qualitative as the images you’d get out of the Galaxy S8 or the iPhone 7 Plus. It’s not as detailed as its competitors neither is its sharpness in low light impressive.

In terms of its processor, the Nokia 8 sports the top-of-the-range Qualcomm Snapdragon 835 chipset which was used on high-end phones like the Samsung Galaxy S7 and HTC U11. The 64-bit octa-core processor is regarded as one of the most power-efficient chipset and it earns the support of the 4GB RAM, meaning it won’t be using tons of power to carry out tasks on the smartphone.

All of these made our gaming experience quite easy as the processor handled the graphics well and also loaded the games very quickly such that we didn’t have problems with gameplay.

The phone also features a pure stock android comes with only the essential apps without bloatware. And like every other flagship of 2017, the Nokia 8 is bundled with Bluetooth 5.0 which makes connecting and pairing to devices fast.

If you still fondly remember the name ‘Nokia’, chances are that this smartphone was made for you. While it was one of the top smartphones to look out for in 2017, it isn’t exactly the best phone on the market right now. Nonetheless, we admit that the Nokia 8 packs a lot of features to make any phone enthusiast think twice.

So, if you’ve considered the Nokia 8 price in South Africa and you’re satisfied with the specs and review, we recommend you purchase a unit and enjoy the quality that Nokia is known for.

Prices of Other Nokia Phones in South Africa