This article is about the current cost of appendectomy in South Africa this 2022 in order to know just how much it will take to do an appendicitis surgery so as to remove an inflamed appendix from the body. If you are interested in this surgical procedure, the information contained in this post will help guide you through it all. 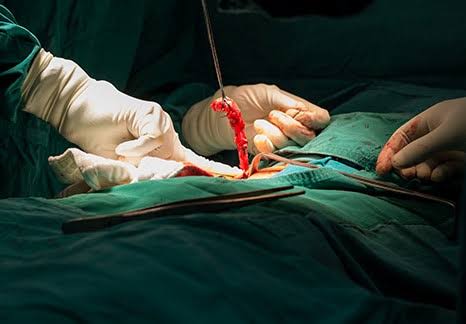 APPENDECTOMY: WHAT YOU SHOULD KNOW

Appendectomy is a surgical procedure that involves the removal of the appendix which is a finger-like projection from the large intestine when it is inflamed. Appendectomy is the standard treatment procedure for appendicitis, even though many medical practitioners may argue that the use of only antibiotics is enough.

The appendix is a small, tube-shaped pouch that is a projection from the large intestine and it is located in the lower right side of your abdomen. It is a vestigial organ, meaning that it has no known function in the body but it can be inflamed, swollen and filled with pus which could cause mild to serious pain in the right lower abdomen, and if left untreated via surgery, may rupture (burst) and lead to other serious, life threatening issues in the body such as sepsis.

The body will still work fine without the appendix after an appendectomy has been done, so if you have or suspect that you have appendicitis, it is advised that you see a general surgeon to know the way forward because delay can lead to the build up of more bacteria and pus in the appendix, and this can cause you serious pain and discomfort on your right lower abdominal area, it may even burst inside your body and become an emergency case causing you to stay longer on admission in the hospital.

WHY IT IS NECESSARY TO PERFORM AN APPENDECTOMY

Just as we have earlier mentioned, an appendectomy is a surgical procedure that is the standard treatment required to remove an inflamed appendix from the body. This disease condition is known as appendicitis and it may happen to anyone, usually between the ages of 6-40 years. It is very rare in children between the ages of 0-5 years as well as in people between the ages of 41-60+ years but can still happen.

Appendicitis is caused by a blockage in the lining of the appendix, this blockage can be caused by faecal matter (poop/stool), a foreign body, etc, resulting in infection that causes the rapid multiplication of bacteria in the appendix so that it becomes inflamed, swollen and filled with pus, and as earlier stated, if not treated in time, the appendix can rupture.

If the inflamed appendix ruptures, the bacteria within it can spread into the surrounding parts of your abdomen, leading to a serious infection called peritonitis. You may also develop an abscess if your appendix bursts. Both situations could prove fatal if one is not operated immediately.

If you have appendicitis and yours is not an emergency case, regular visits to your surgeon will help you suppress the illness with the right antibiotics and analgesics until your surgery date. Before then, you may have to do some tests as recommended by your surgeon to rule out any underlying illnesses such as cancer, diabetes, HIV, etc. To that effect, you may be required to do the following tests:

The following are the various symptoms of appendicitis. Kindly note that symptoms differ from person to person.

Pregnant women with appendicitis may experience pain in the right upper abdomen instead of the right lower abdomen and this is due to the fact that in pregnant women, the appendix is raised higher during pregnancy.

HOW TO PREPARE FOR AN APPENDECTOMY

In order to prepare for an appendectomy, you will need to be admitted into the hospital surgical ward. Some General Hospitals in Durban State, as well as other hospitals in South Africa, such as Federal Medical Centres, Teaching Hospitals and Private Hospitals may admit you a day before the surgery so as to prep you and acclimatise you with the environment you’re in before the procedure.

Before the surgery day, you will need to sign a consent form giving the green light for the procedure to take place, and avoid eating and drinking for at least eight hours, meaning that you may need to stop eating and drinking from 8pm, for some hospitals, it is from 9pm-10pm depending on the time of the appendectomy the next day.

The anaesthesiologist will come and ask you questions about your medical history, whether you are diabetic, hypertensive, have ulcer, whether you drink or smoke and react to Non-Steroidal Anti-inflammatory drugs (NSAIDS), as well as the drugs you are currently treating the disease with. It is very important to tell the doctor the truth about your medical history so that they do not treat you wrongly.

Kindly note that your surgery is dependent on your blood pressure at that particular time and if it is too high, it may be suspended and rescheduled. Other factors also determine whether your surgery will proceed forward from the information you give to your doctors.

On the surgery day, you will have to change into the surgical gown and may be stretchered into the theatre where you are either given general anaesthesia to keep you in induced coma while the doctors operate and remove the inflamed appendix or you’re given local anaesthesia to numb the area while surgery proceeds as you are awake.

Once the procedure is done, either through open surgery or laparoscopy, you will be stretchered back to your surgical ward where you will be closely monitored for up to five days and placed on intravenous medication (drips and injections) which if you show signs of healing fast, you may be discharged once the five-day period is over. People who undergo laparoscopy may be discharged two days after surgery.

During your post surgery stay at the ward, for open surgery patients, you may not be allowed to eat and drink for about three days while you’re on intravenous fluids but may be allowed oral sips of water after the three-day period to aid bowel movement, then gradually you will be introduced to pap and semi-solid food as you progress in your treatment.

When you’re discharged after an appendectomy, your surgical site will be dressed and cleaned properly and you will be told the days to come for dressing and also the clinic days when the doctor can examine you so you can be followed up. You may also be told to avoid bathing so you don’t expose the area to infections until your doctor tells you otherwise. Kindly adhere to all the instructions given to you by your doctor.

RISKS INVOLVED IN AN APPENDECTOMY

As with any other surgical procedure, appendectomy comes with its own risks and you will be made fully aware before your surgery proceeds. These risks include some of the following:

Although it is rare to experience complications, anyone who has concerns about their symptoms should call their doctor immediately.

On the average, the current cost of appendectomy in South Africa this 2022 is between the price range of R$ 1,830 – R$ 2,562 in most public hospitals. Other charges such as those for tests, drugs, drips and injections as well as hospital stay may raise the total package to about R$ 4,392 – R$ 5,490 or more depending on the public hospital of your choice.

Private hospitals charge way higher and the cost of appendix surgery at private medical facilities may be as high as R$ 10,980 or more, depending on the services they render. If the appendectomy is done using the laparoscopy procedure, you may be charged as high as R$ 18,300 or more, kindly take note and make enquiries where necessary.

This article is purely informational and does not in any way substitute for medical advice. South African Guide encourages people seeking to get an appendectomy procedure done to visit the hospitals of their choice and make the necessary fact finding before committing their fees to the whole process.

How To Start Cassava Farming Business In South Africa